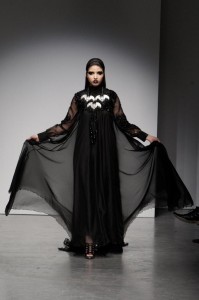 Ziad Ghanem is a famous Lebanese fashion designer based in London. Dubbed the ‘Cult Couturier’ Ziad combines his cutting edge couture skills with easy-to-wear fabrics and raw street elements. Established as a ready-to-wear designer for both men and women Ziad’s uber underground label is breaking new ground with bespoke designs, private commissions and junior line: Maiden Britain. Here’s an exclusive interview with the man who believes that there is no fashion designers in Lebanon.

Ziad is internationally admired and has presented catwalk shows in London, Paris, Dubai, Athens, San Sebastian, Ekaterinburg, Moscow and Riga. As well as designing for famous clients such as Lady Gaga and Gwen Stefani, he also won “best in show” at London Fashion week 2010

Ziad describes his fashion as being “Sophisticated Underground,” saying that his clothing is comfortable, cares more about how you feel rather than how you look and at the same time being both “underground” and “couture.”

Who do you respect out of the Lebanese designers?

No-one, there is no fashion in Lebanon. All these designers are like de-ja vu crumbled on top of each other and no-one is supporting the younger designers. The fashion scene in Lebanon is just a platform to promote a De-Ja vu. If you look at a dress made by a Lebanese designer you wouldn’t know who made that dress because they all look the same, its cliché. I’m sure there is so much talent in Lebanon but they don’t have the chance and it’s about time the youth got their chance. I’m sick of seeing a “rip-off Valentino,” there is already a Valentino and he is still alive, so give the original Lebanese designers a chance!

What was your start in Fashion?

Born in Lebanon, I come from a very fashionable family. My mum used to model in the 60s, my grandfather had a shoe factory in Haddad, one of the biggest shoe factories in Lebanon. So I was brought up in a very fashion orientated family. From a very young age I started designing and drawing and my family encouraged me. However the minute I decided I wanted to be a fashion designer my family said oh my god, are you not going to be an architect or a doctor? No, You are going to be a tailor?! and obviously there were no fashion schools in Lebanon so everyone was against the idea of me becoming a fashion designer. But I spent my whole life designing and I was stubborn and I wanted to do it. So I went to study as a pattern cutter in a studio in Aschrafieh called Georges Sissine but it wasn’t really what I was looking for. I was pushed away from the creative side and people said my designs were too “avante-garde” and people told me “no-one is going to wear those designs.” Baring in mind this was still during the war. Then someone from a couture house in Lebanon called chouiteh and they spotted my talent and asked me to come and start working for them and that’s how I started.

How did you come to England?

I always wanted to come to London, and I always inspired by British fashion but it took me a long time because I didnt 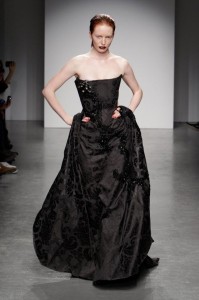 have the financial support from my family and I had no education, I missed so much school and we were bouncing around the country constantly during the war. I didn’t like Paris because it wasn’t edgy enough and it was too misogynist. I’m not a misogynist designer, I don’t want my ladies to be presented as sexual objects, I also want my designs to be genderless, I don’t design for any particular gender.

When I came to London I couldn’t get a job, I couldn’t afford to go to college and I didn’t get accepted at any colleges so I just started designing and pretty much as soon as I started people started paying attention and I started selling in a boutique called “Kokon to Zai” in Greg Street. And even though at first no-one would buy my clothes I received so much support from them and they told me they loved my clothes and bought my first collection. And it pretty much started from there and it just got better and better.

I used to design for so many big Lebanese designers when I was working in Lebanon, I used to sell my designs for $10 and they would get the credit for my work. I was happy though that I was able to sell my designs but my parents used to say to me that all my peers were multi-millionaires and when was I going to make a dress that people would want to wear and that my designs were too “avante garde.” And that the dresses I was making were not suitable for an Arabic market. But this isn’t true, Haute Couture is supported with lots of investment from places like the Gulf so I carried on doing what I was doing and I received a lot of support from my mother. I still have very successful friends working in the Arabic fashion industry telling me to make less avante garde designs to make my clothes more markettable and that my dresses are not going to sell my dresses in places like Oxford Street. But I always reply that my dresses and concepts are my own and I do not want to sell in places like Oxford Street. I have no problem selling my clothes and recently I have been approached by ladies from the Gulf telling me they love my clothes and they want to buy some of my designs and I achieved this without changing my style and I am very gratefully and thankful for the support they have given me. I also hope in the future to help support young artists all over the world.

The thing is, I do not design to please the client, which is what all Lebanese designers are doing, I am not a tailor. I do what I want to do and I educate the clients about my style and we only sell to an exclusive few clients. It takes a lot of courage to do what I do, especially when I started in Lebanon but I kept on doing it because at the end of the day I didn’t want to “fit in” and I wanted to stay to what was true to me.

Lebanese society is very beautiful, it is very family orientated and supportive but at the same time it is very narrow minded and judgmental and very harsh on others being different. But it is getting better and there are many open minded people in Lebanon too.

Tell us a little about your style.

The way I work is I never really use models, I cast my people beforehand based on their own individual look and personality and I let my models inspire me so that lets each individual piece be inspired by the model it is for. As I said, I don’t make my designs to sell, I make them based on my own inspiration.

People and reality. I love watching people and observing their movements and their characters. I also love theater and Cinema. I want my shows to be an experience and I plan every detail from the music to the performances. Also I love originality, I do not like all this botox and this plastic look that makes everyone look the same.

Do you have ambitions for the future?

Yes, I am only at the beginning! My ambition is to always have my own way, I am very selfish and I am not willing to compromise. I hope to continue like that and make a succesful living from it, it has been my dream since I was 6 years old.

What are your impressions of Beirut and Lebanon?

There are so many young people in Lebanon with their own flare and style coming up and there is a lot of promise there. There are people that want to change the fashion and stuff, there is a big underground art and fashion scene in Beirut and I think it thrives there. I think Lebanon needs to support this underground movement more, its important for Lebanon to support these people and let them know it’s ok to break away from the mainstream. At the moment there is very little originality in Lebanon and it needs to be supported. My fashion is well supported in Lebanon among certain circles and I hope this continues to grow.