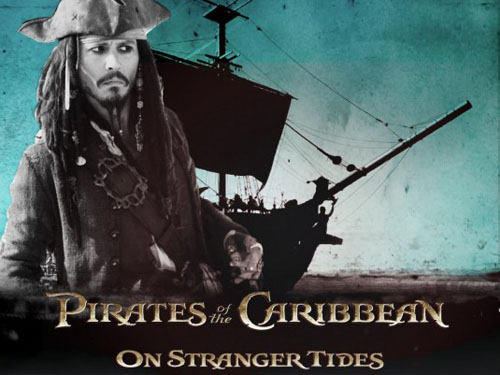 The Depp series of Pirates of the Caribbean is still on, with the new sequel hitting the theatre in May 2011. The movie starring Johnny Depp, Geoffrey Rush, Penelope Cruz, Ian McShane, Kevin McNally, Astrid Bergès-Frisbey, Sam Claflin, Stephen Graham, Yuki Matsuzaki, Gemma Ward is an action adventure movie in its fourth part.

“Pirates of the Caribbean: On Stranger Tides” captures the fun, adventure and humor that ignited the hit franchise. In this action-packed tale of truth, betrayal, youth and demise, Captain Jack Sparrow crosses paths with a woman from his past (Penelope Cruz), and he’s not sure if it’s love–or if she’s a ruthless con artist who’s using him to find the fabled Fountain of Youth. When she forces him aboard the Queen Anne’s Revenge, the ship of the formidable pirate Blackbeard (Ian McShane), Jack finds himself on an unexpected adventure in which he doesn’t know who to fear more: Blackbeard or the woman from his past.

Rush reprises his role as the vengeful Captain Hector Barbossa, and Kevin R. McNally returns as Captain Jack’s longtime comrade Joshamee Gibbs. Claflin stars as a stalwart missionary, while Berges-Frisbey is transformed into a mysterious mermaid.