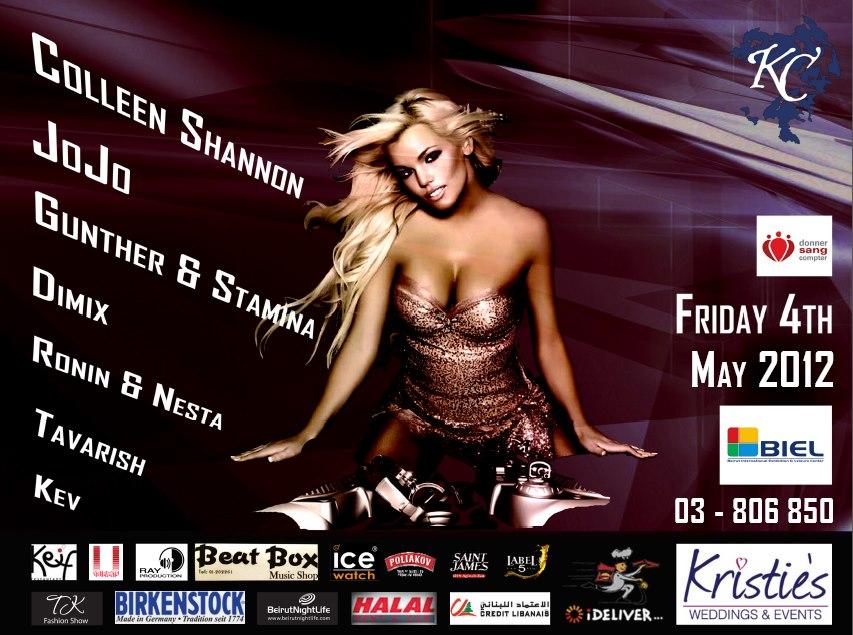 Details: Summer’s coming up, the heat wave is on its way, and there’s nothing we can do to stop it. So we just decided to prepare you as possible as can be, as KCG Presents “Colleen Shannon”, as only she, the Sexiest DJ for 2011 and Playboy Playmate, can get as hot enough as summer’s heat, spinning the deck with the sexiest most sensational RnB records.

Excited already? Wait till you Hear this..

This night will be featuring:

Beirut has been many things to many people over the last century, but thanks to a devoted team of industry players – including whirlwind DJ tag team Ronin and Nesta – the city has become a hotbed of house music.

DJ JOJO has been on the decks since his childhood. He started playing at family parties, pubs, clubs and events before moving to London to become a resident DJ at the Ministry of Sound He toured the most prominent Clubs around the world from Beirut to London, Zurich, Paris, Ibiza, Monte Carlo, New York, Dubai, Abu Dhabi and many other major cities, and played with International DJs such as: Armin Van Buren, Tiesto, Bob Sinclair, Paul Van Dyk, David Guetta, John Digweed, Sacha, Paul Oakenfold and many more. At present DJ Jojo is the number one DJ in the Middle East and currently the Resident DJ of ‘Sky Bar’, Beirut’s No. 1 Club, which was voted The Best Club in the world in 2008

Playboy Magazine’s 50th Anniversary Playmate – Colleen Shannon – ” The World’s sexiest DJ” has been popping up all over the place these day’s, starring in major motion pictures, television, magazine covers, major print modeling campaigns, and DJing the biggest superclubs, venues, and events all over the world. In addition to prominent roles in the motion pictures “Sci-Fighter” and “Miss Castaway”, Colleen is the female lead in the upcoming theatrical release “The Passing”, which also stars Paul Gleason (Van Wilder, Not another Teen Movie, Die Hard). Colleen has also just completed her role as a DJ in the new Shannyn Sossamon (40 Days and 40 Nights, Rules Of Attraction, The Order, A Knights Tale), Gary Busey, Michael Madsen motion picture “Chasing Ghosts”. Her next role will be in the Film “The Gene Generation”, being produced by Dean Devlin (Independence Day, The Patriot), and Kim Winther (The Day After Tomorrow, Daredevil, We Were Soldiers, Freddy got Fingered), and directed by two time New York Film Festival winner Pearry Teo.

Who have been rocking and putting on fire the Middle East and Lebanese’s biggest dance floors with there Dirty, Groovy and Twisted sounds and who over the past 7 years, have been avid supporters of the Underground Scene in Lebanon.

“He’s the only Drum and Bass DJ in Lebanon. He’s been spinning a variety of dnb styles for over 4 years, took the underground scene by storm, being part of insane parties in clubs all over the country. He played alongside a large number of international artists, such as: [Cooh], [I:gor], [Balkansky], [Erionite] and [Iszoloscope]… He also hosts the only middle east Drum and Bass podcast feauring international artists such as: [Miss red Flower], [Future Signal], [Dose], [C.a.2k], [SPKTRM], [Neonlight]… He has been invited by many electronic music organizers and he featured most of them. His mixing skills always has the crowd jumping and the speakers in full blast. Tavarish’s sets always have his listeners begging for more and more with his intense fast break beats and heavy baselines.”

E-Group’s very own DJ who has mixed in the hottest Clubs such as Palais by Crystal – Whiskey Mist Beirut – Maison Blanche.. Alongside established names in the local and international scene such as Ramz, maDJam, Base, Geo, Ronin’n Nesta, Gunther and Stamina and Ed Hardy’s Official DJ Radryan.

Entertainment wise, the Sexiest Dancers and Models will be performing on stage to add some more visual flavor to the music.

Tickets on sale for:

Strictly 18+, the hosts reserve the right of admission.

In Collaboration with Ray Productions.